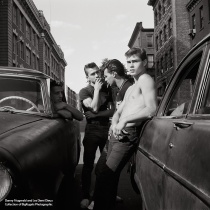 As far as we know, Fitzgerald never printed this image. We found a short, four-frame strip of images of brothers Johnny and Vinny (second and fourth from left) smoking between two vintage cars with friends, on a street in Carroll Gardens, Brooklyn. The film roll was dated 1963.