Photographer Danny Fitzgerald (1921-2000) and his studio “Les Demi Dieux” photographed Brooklyn youths in the early 1960s, and was nearly forgotten until recent years. 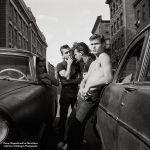 Photographer
Fitzgerald (1921-2000) was born in Carroll Gardens, Brooklyn and shot street and male nude physique photography for a brief span from 1958 to 1968. He and his partner Richard Bennett produced and marketed their photographs under the pseudonym “Les Demi Dieux.” Read more. 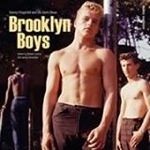 Publication
Brooklyn Boys: Danny Fitzgerald and Les Demi Dieux, the first comprehensive monograph of his work, was published by Bruno Gmünder Verlag of Berlin in October 2013. The book is written and edited by Robert Loncar and James Kempster. Learn more.

Exhibits
Since the first major exhibit of Fitzgerald’s photographs at the Steven Kasher Gallery in December 2013, his work has been featured in several other shows and exhibitions including AIPAD. See more.

Collection
All photographs in the new book and exhibition come from the collection of BigKugels Photographic, who rediscovered Fitzgerald’s work in the early 2000s. The works in the book and on this site are copyright protected. Reproduction is prohibited and all rights are reserved. Find out more.

So, it may not seem like much, reaching 100 followers, especially when you think of the thousands or millions that follow other sponsored pages on social media sites, like Facebook. But we’re proud to boast that the Facebook page for Danny Fitzgerald and Les Demi Dieux reached its 100th “liker,” or follower, yesterday. Organically. That’s […]

Several friends mentioned to us that they had seen a nice stack of Brooklyn Boys on the second floor of Strand Books, New York City booklovers’ trove for bargain and rare publications. So we stopped in on our way home and found our monograph on Danny Fitzgerald and Les Demi Dieux in good company with George Platt Lynes, […]

The NY Photo Show has opened. Come see us today and tomorrow. More at usphotoshows.com.

Set Up for the NY Photo Show: Tomorrow & Saturday

Tonight, we were at the Lighthouse on 59th Street between Park and Lex, setting up the BigKugels Photographic booth for tomorrow’s NY Photo Show. As you can see, Brooklyn Boys is well represented. Bring your copy of the book and get it signed, or buy a signed copy at the show! As you can see, there are […]

BigKugels Photographic will have signed copies of their book Brooklyn Boys: Danny Fitzgerald & Les Demi Dieux, as well as several of Fitzgerald’s vintage photographs, at the annual New York Photo Show at the Lighthouse, April 11th and 12th. Come meet “the guys” of BigKugels Photographic who wrote and edited the recently released 160-page fine art […]

Danny Fitzgerald at AIPAD, April 10 to 13

The Steven Kasher Gallery will feature works by Danny Fitzgerald and Les Demi Dieux at The Association of International Photography Art Dealers’ annual photography show at the Park Avenue Armory, April 10th to 13th. The AIPAD show is one of the most prestigious photography events in the world, and we are proud to have Fitzgerald […]